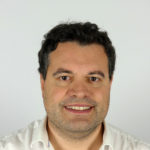 Xavier Coumoul, Professor of Biochemistry and Toxicology (University Paris Descartes, PRES), has worked for many years on the molecular effects of environmental pollutants using several models (cells, invertebrates, mice) and clinical studies. He has focused his activity on the Aryl hydrocarbon Receptor, a transcriptional factor, which is activated by many xenobiotics. His research work is complementary to his teaching activities (Director of the Toxicology Master’s Degree Program) in which he implements innovative teaching approaches.

After graduating from the Ecole Normale Supérieure and University Paris Sud with a master’s degree in endocrinology, Xavier Coumoul obtained his PhD in toxicology (2002). His thesis dealt with the role of environmental pollutants as regulators of the expression of metabolizing enzymes. After a post-doctoral fellowship in the laboratory of Dr C. Deng (National Institutes of Health, USA) in which he participated in the creation of a new RNA interference tool (in vivo conditional knock-down), he returned to France as an Assistant Professor (University Paris Descartes) in the research group of Pr. R. Barouki. Dr. Coumoul took over the leadership of this group in 2014.

Dr. Coumoul investigates the mechanisms of action of environmental pollutants with a focus on dioxins and their receptor the AhR (Aryl hydrocarbon Receptor). The AhR is a transcription factor which, following binding to ligands, induces the expression of metabolizing enzymes for the detoxification of these same ligands. However, as demonstrated by Dr. Coumoul’s work, this receptor participates in other cell processes as suggested by the following: