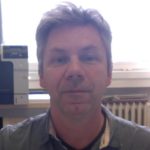 Raymond Mongeau holds a PhD in Neurosciences from McGill University in Canada on the mechanisms of action of antidepressant drugs funded by the Medical Research Council of Canada. He was awarded a fellowship from the Human Frontier Science Program to work as a post-doctoral fellow at the Queen’s Medical Center, UK, to carry out behavioral and neurochemical studies in preclinical models of panic. This post-doctoral training was then completed at the UCLA, USA, to study models of innate vs. conditioned memory. He was then recruited senior researcher at the California Institute of Technology, USA, to establish innovative behavioral models in conjunction with molecular and neuroanatomical imaging tools. He acquired experience in the private sector at the Neuroscience Pharmaness, Italy, where he worked, among others, on behavioral models of negative symptoms in schizophrenia and a Web integrated database of neuropsychopharmacology. He returned to academic research in France, in collaboration with M. Hamon and L. Lanfumey at INSERM U894, La Pitié-Salpêtrière in Paris. In 2013, he was recruited as associate professor in unit EA4475, directed by C. Marchand-Leroux at the university Paris Descartes, where he worked on preclinical models of traumatic brain injury and post-traumatic stress disorder. He is now working on the interactions between traumas and addiction in the PharmAddict team CNRS ERL 3649 of F. Noble, and in the unit Inserm UMR-S 1124 of R. Barouki, at the Saints Pères Center, Paris University.