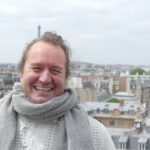 Pierre Nioche is a Principal Investigator in a structural biology group in INSERM UMR-S1124. His passion is to discover the inner working mechanism of proteins at the atomic level by studying their dynamics and reactivity. He is also a Professor at the University Paris Descartes where he delivers lectures on mathematics, physics, biochemistry and structural biology to undergraduate students.

Pierre Nioche first studied mathematics and physics at the University. Then he moved to biophysics, structural biology and biochemistry. He obtained a Master’s degree in Biophysics and a Ph.D. in Structural Biology from the University Pierre and Marie Curie (University of Paris 6). He then worked for several years in the laboratory of Dr. C. S. Raman at the University of Texas-Houston Medical School (USA). He worked mainly on the soluble Guanylate Cyclase (sGC), the NO receptor in humans, and on cytochrome P450s which gave rise to two major publications in 2004 and 2008. With the help of Avenir and INSERM/University Paris Descartes Chair programs he returned to France to create his own research group.

His goal is now to understand the molecular mechanisms of several proteins such as xenobiotic and NO receptors, cytochrome P450s and purine metabolism enzymes.