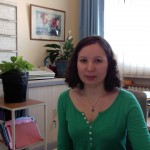 Engineer
Degeneration and plasticity of the locomotor system

Delphine Sapaly, engineer in cellular biology, has worked since 2014 in Frédéric Charbonnier’s team in charge of imaging approaches and as lab manager.

Graduated from the ISARA-Lyon engineering school, she specialized in medical biology during her professional career at Inserm. She joined Frédéric Charbonnier’s team in 2014. She first worked with Suzie Lefebvre on a valorization project funded by the company Satt IDF Innov, which investigated the effects of a candidate drug for the therapy of Spinal Muscular Atrophy (SMA). The goal of the project was to understand the molecular mechanisms of Flunarizine that have therapeutic potential in a mouse model of SMA. (Sapaly et al Sci Rep, 2018)

In 2016, she was recruited as engineer at Paris Descartes University, in the same team. She is in charge of imaging approaches of the team and she is carrying the role of lab manager.

In parallel, she is studying the perturbation of the energetic metabolism in several human severe neuromuscular diseases, including SMA and Amyotrophic Lateral Sclerosis.