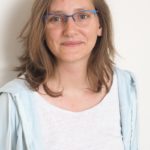 Claire Leconte started her carrier with a Master’s Degree and a Ph.D. degree (2005-2009, University of Caen), under the supervision of Pr. Schumann-Bard and Dr. Myriam Bernaudin, and worked on the effects on neuronal death, neurogenesis and behavior of chronic intermittent hypoxia alone or as post- or pre-conditioning in relation with cerebral ischemia in mice.

In 2010, as a post-doctoral fellow, under the supervision of Dr. Nosten-Bertrand, she worked on the deleterious effects on adult behavior of neonatal bisphenol A (Pierre and Marie Curie University, Paris). During her studies she acquired cellular biology, pharmacology skills and with a particular attention on behavioral assessments in rodents. The research projects done, as assistant professor in pharmacology in the EA4475 (2012-2018, Paris Pharmaceutical Faculty, Paris Descartes University), involved long term behavioral deficits in the adult mousse after experimental mild traumatic brain injury, or after a neonatal cerebral ischemia, together with the development of endothelial, oligodendroglial and microglial cell culture to better understand pathological mechanisms. Recently, she joined the team of Dr. Florence Noble since 2019, to work on models of post-traumatic stress and opioid addiction comorbidity to validate common therapeutic targets.